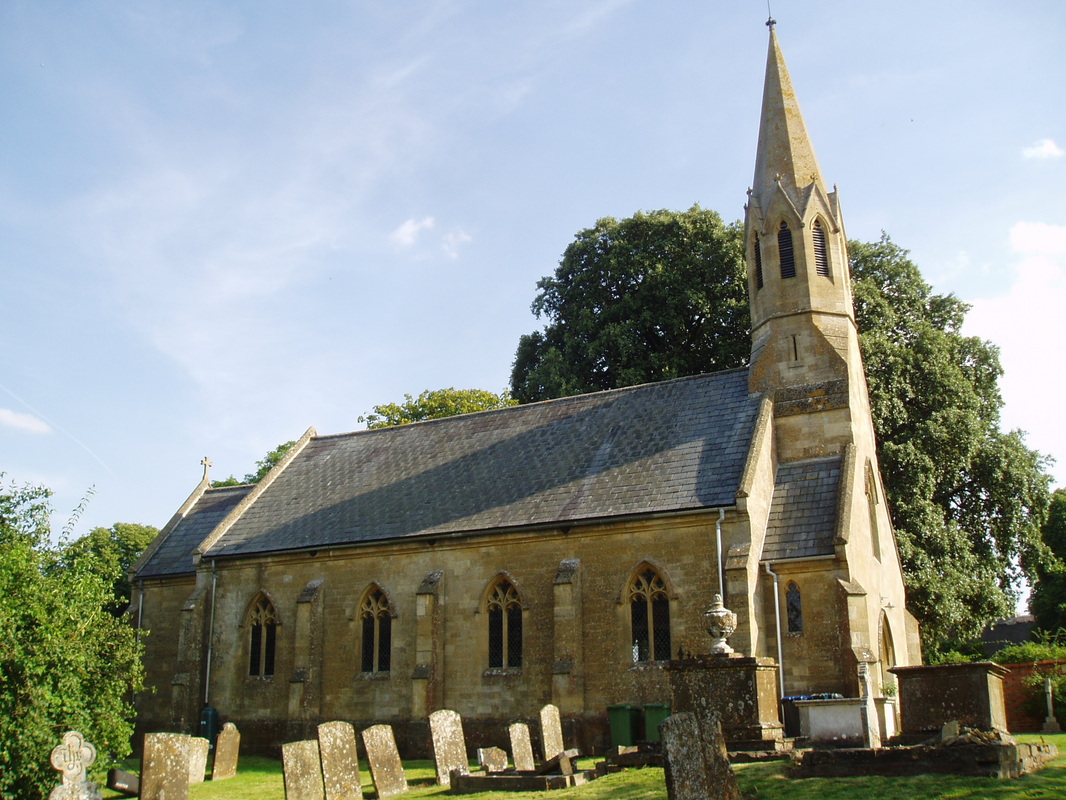 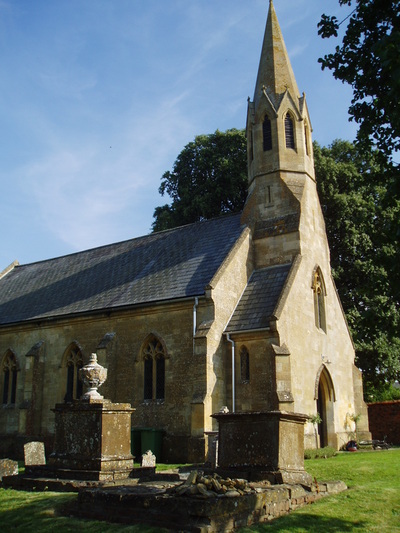 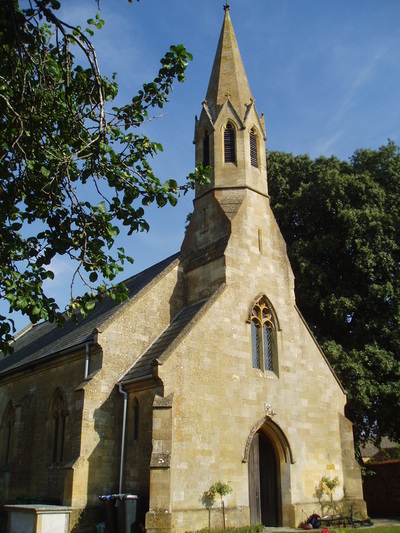 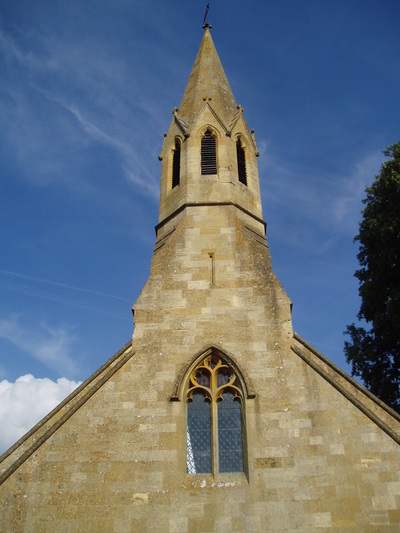 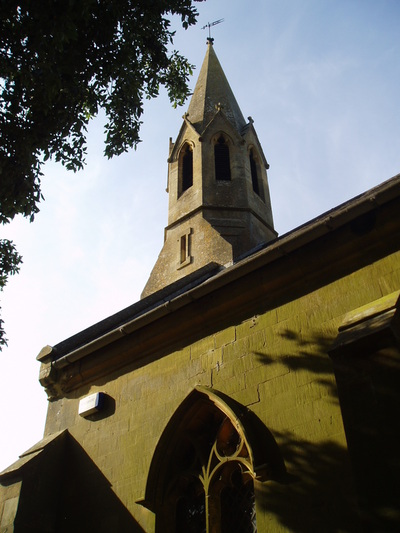 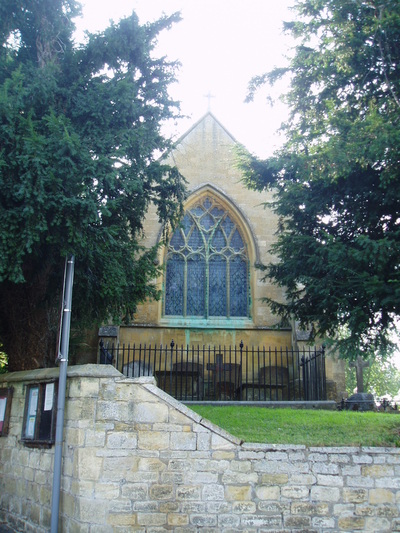 St Peter's church at Stretton on Fosse is a simple early Victorian building of honey-coloured stone set in a small plot of a churchyard, somewhat hemmed in by houses on the southern side and overshadowed by trees elsewhere. In fact the church is fairly secretive and easily to miss from the road, set back on high ground above the quiet lanes of this tranquil village.

The church itself was entirely rebuilt in 1841 to the designs of Thomas Johnson, and is a simple two-cell structure, a small chancel and a more substantial nave, finished off at the west end by a small octagonal steeple, the base of which serves as a tiny porch and the main door of the church. 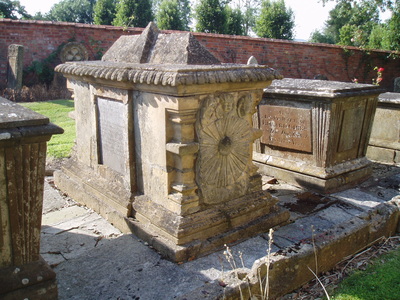 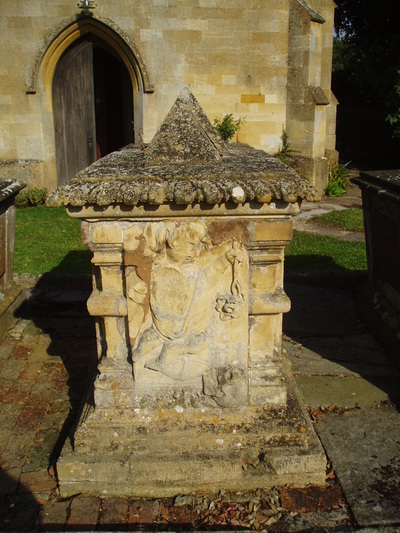 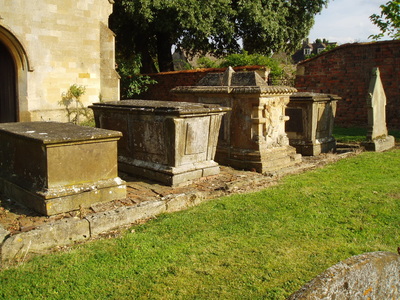 There was a much older building on this site but nothing remains as testament to its pre-Victorian use beyond the impressive 18th century tombs gathered in front of the west end of the church, some adorned with cherubs and ornament such as one expects to see in Cotswold churchyards. 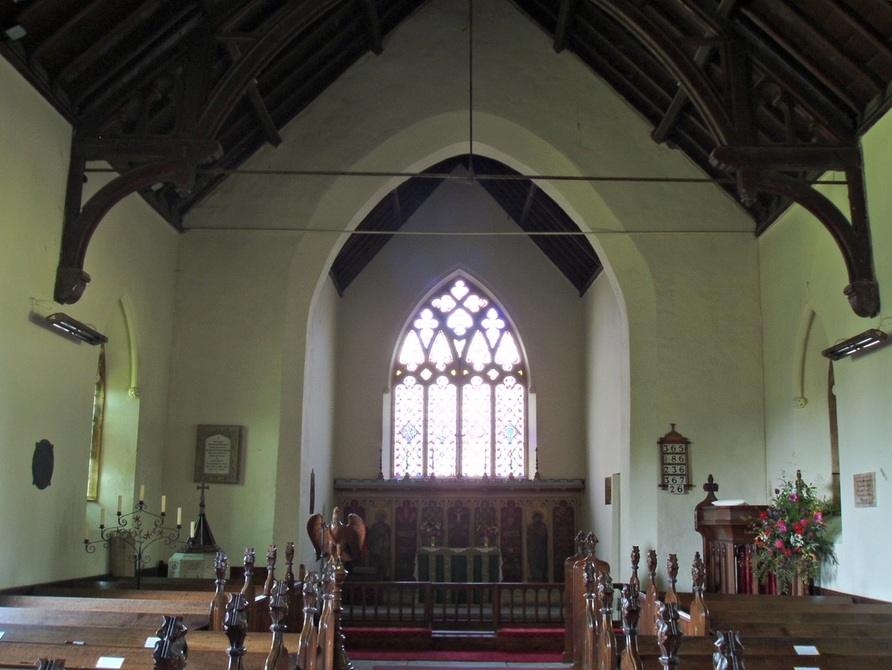 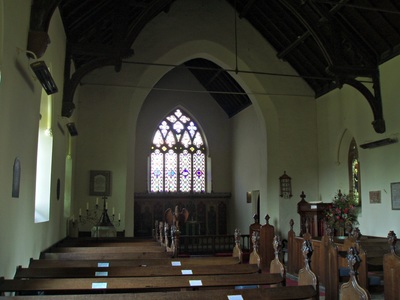 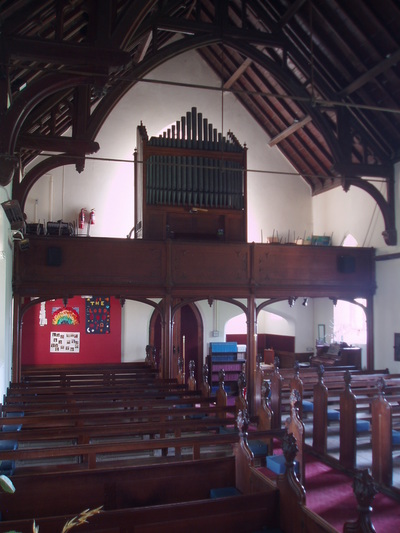 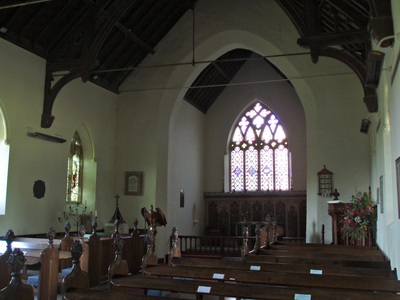 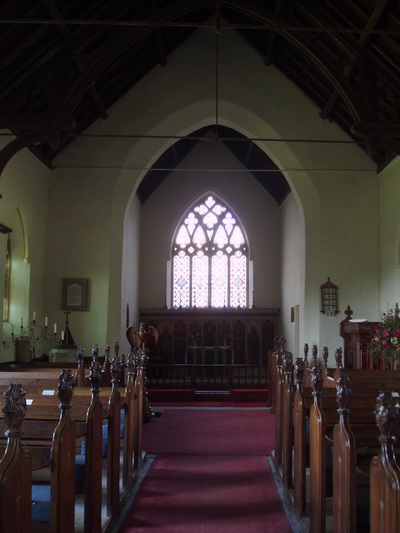 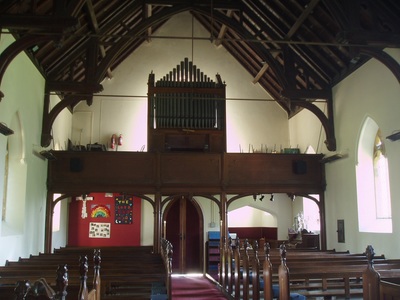 The interior is simple and unpretentious, and darker than one might expect despite it's cream-washed walls (in this case owing to adjacent trees on the south side, rather than an abundance of stained glass, the usual culprit!). The furnishings are mostly of a piece with the building, including the west gallery which supports a modest organ. The only later additions appear to be the mural painting that enlivens the paneling behind the altar (eucharistic symbols along with SS Peter & Paul, difficult to appreciate in the low lighting) and the two stained glass windows at the east end of the nave (late 19th and early 20th centuries respectively). 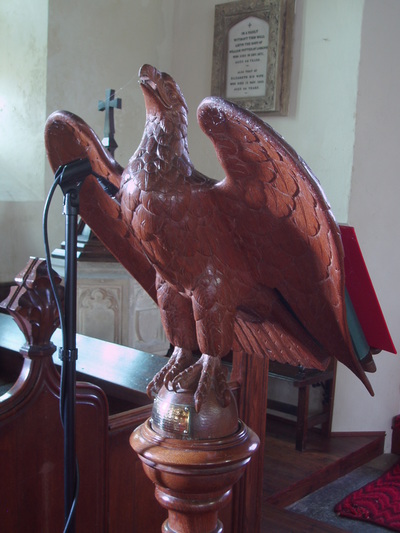 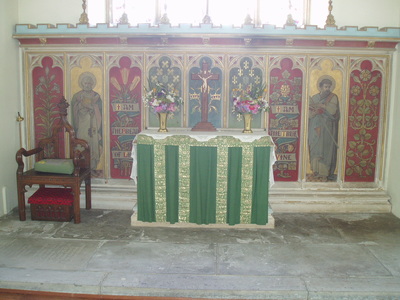 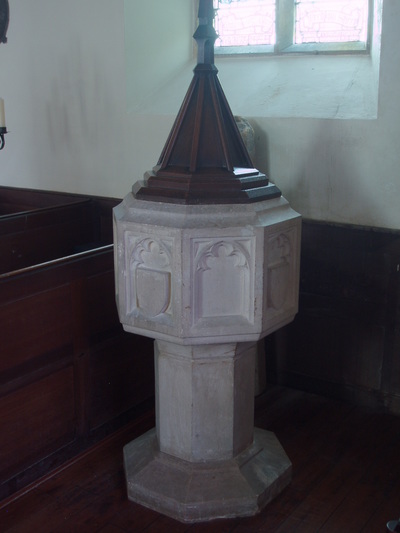 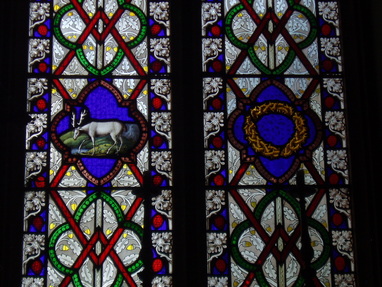 The east window is roughly contemporary with completion of the present church, dating from the 1840s and most likely the work of Chance Brothers of Birmingham. The design is mostly decorative grisaille, enlivened by more lurid coloured accents and symbolic medallions, along with elaborate scrolls, agnus dei and holy dove in the traceries.


Two smaller two-light windows either side of the nave contain glass by James Powell's & Sons c1902, with Christ's call to St Peter on the north side and St Peter freed from prison by an angel to the south. Both are typical examples of Powell's Pre-Raphaelite influenced work at this time and were most likely the work of the studio's chief designer Joseph Brown.


The remainder of the nave windows are plain glazed except for the topmost tracery-light in each, which contain symbols and ornament roughly contempiry with the glass in the east window, and probably also by Chance. 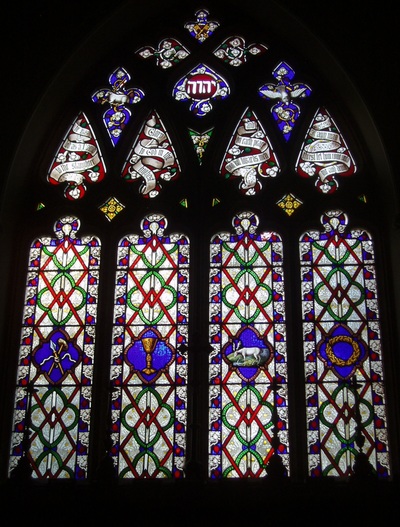 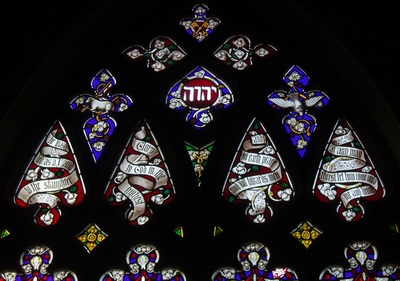 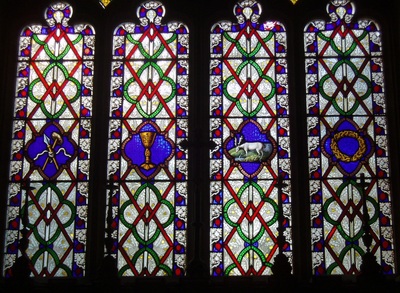 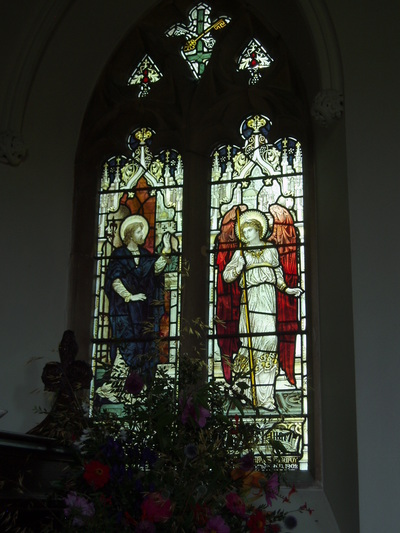 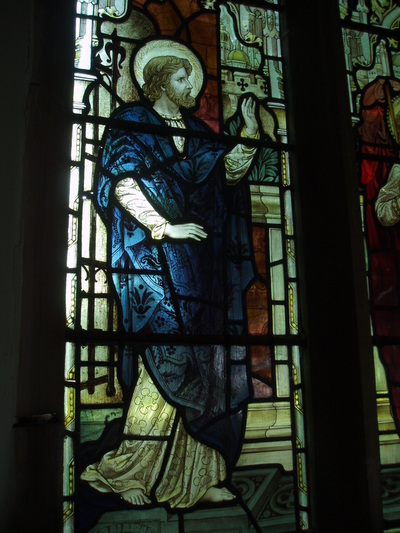 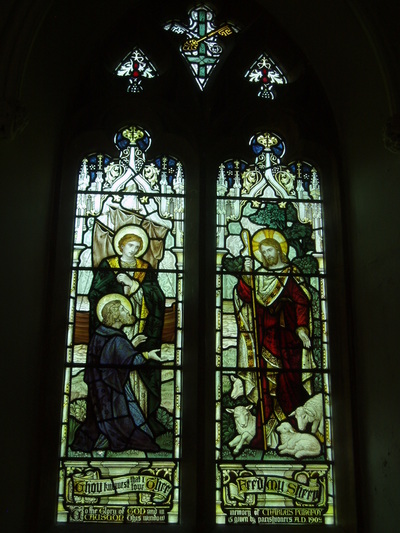 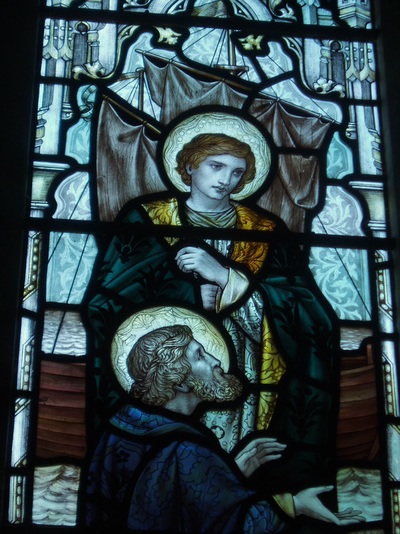 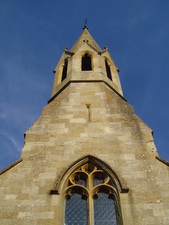 This is a church which won't delay the visitor for long, but it is a pleasant place that will offer a peaceful contemplative space for the traveller in need of some tranquillity, as it is generally normally open in daylight hours.