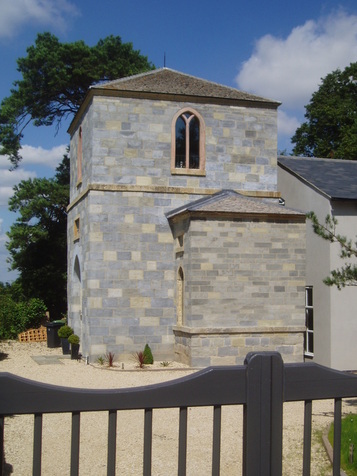 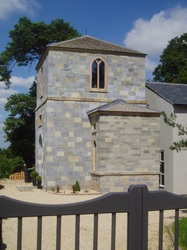 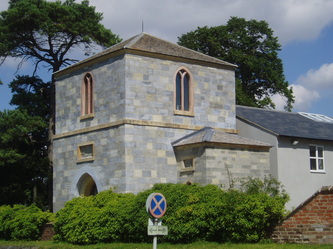 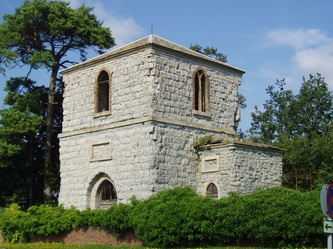 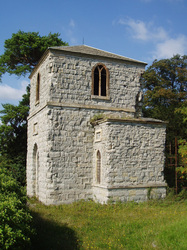 St Thomas's was the second of Ettington's three churches, built in 1795-8 by architect Thomas Johnson in a very simplified Georgian Gothic to serve the new village, following it's forced relocation from it's original site at Ettington Park, where the original medieval church remains (itself mostly a ruin apart from it's tower and transept).

This was never an ambitious building, a rather low budget replacement compared to it's predesscor, though doubtless it satisfied the Georgian parishoners need of a preaching house. It might be a simple, unpretentious building, but certainly not without a certain picturesque charm.

When the new, more grandiose church of Holy Trinity was opened in 1903 St Thomas's became obsolete, and most of the building was demolished soon afterwards, leaving just the cube-like tower and part of the west end of the nave. The memorial tablets were transferred to the new church, along with the pulpit, according to Pevsner, though I did not see it there in 2012. Apparently the Lord's Prayer, Creed and Ten Commandments (presumably the former reredos) remained in the base of the tower over the years (are they still there?). 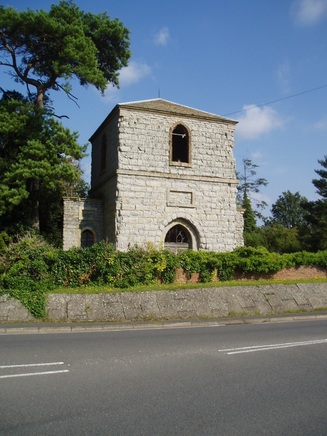 The derelict tower in 2006, prior to it's recent conversion.
It remained as a derelict curiousity throughout most of the 20th century, it's pyramid roof somehow standing firm as stonework crumbled and ivy crept up the walls. When I first saw it in the 1980s it was very much a creeper clad ruin, with some of the Y-tracery missing from the belfry windows, however by the beginning of this century the ivy had gone, and the decay seemed to have been arrested at least.

In 2011 the site was developed for residential use, which entailed constructing a large new house on the site of the old nave and annexing it to the rear of the old tower, which in turn was given a very thorough makeover to incorporate it into the developement. When I first saw the results of this during the building work I was quite horrified, as it seemed the entire surface of the old structure was in the process of being renewed to the point of looking quite fake.

Closer inspection more recently, now the work is finished, reassured me that the new outer surface is merely rendering, allowing the old fabric to remain largely undisturbed underneath, rather than a wholesale replacement of the old masonry, thus the intervention looks brutal, but is actually far more sensitive in approach than it might appear at first sight. The rendering has been coloured to resemble masonry blocks again, a kind of camouflage effect!.

It might be sad to see this venerable structure lose it's historic patina, but looking back at my photos prior to the work it is clear the old stonework was in very poor condition, and on reflection this might have been the best option of saving it, even at the cost of making it appear as a brand new build. Residential use will also ensure that the building is cared for and gives it a future.

St Thomas's has been private property for many years, and especially now that it is someone's home this privacy should be respected. Fortunately it is easy to view the old church building from the road or path without disturbing the residents.