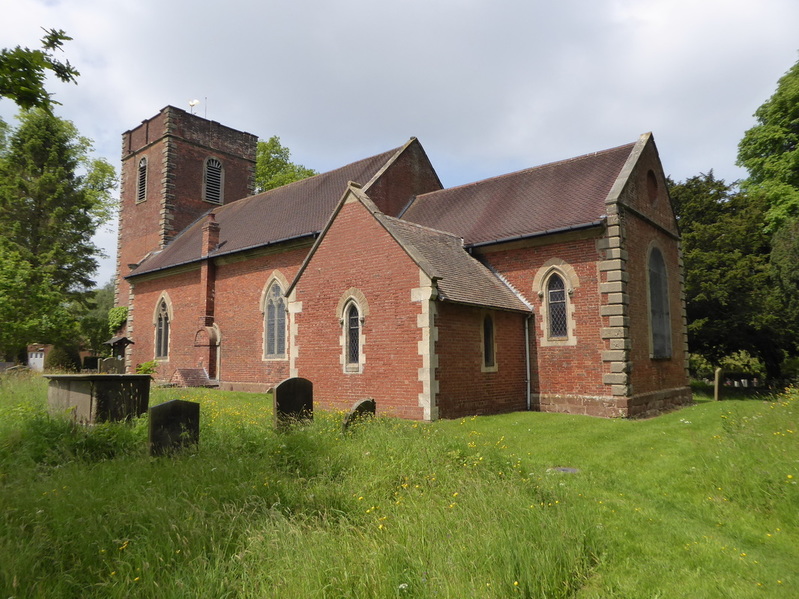 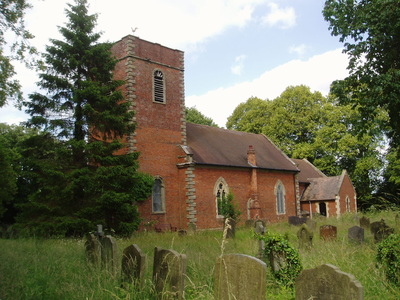 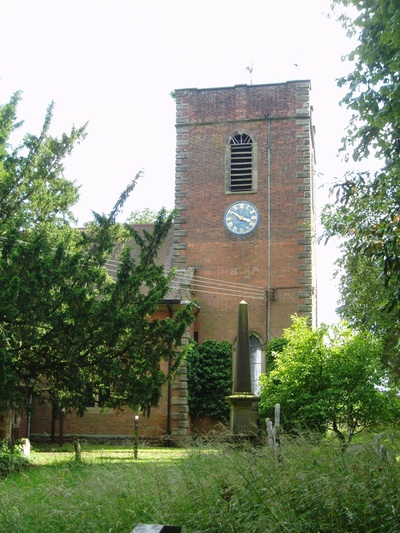 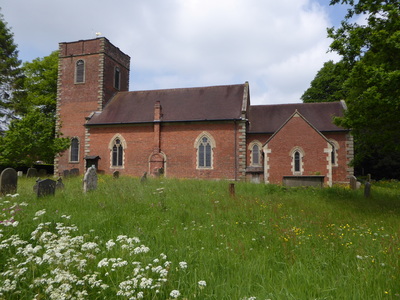 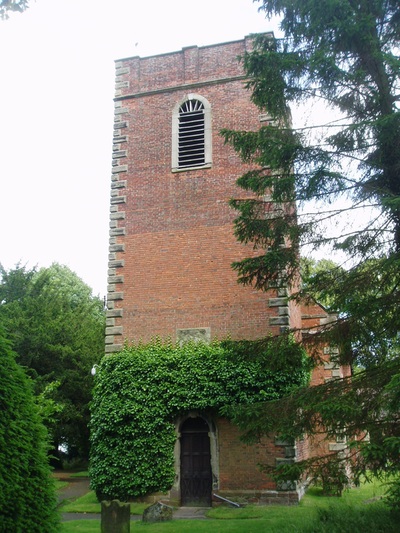 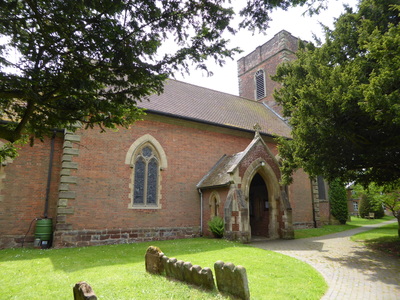 Barston is a pleasantly quiet place, tucked away in the countryside a couple of miles north-east of Knowle; that it was never a large settlement was reflected by the fact there was only a chapel of ease to Berkswell here rather than a parish in it's own right. The old chapel had fallen into disrepair by the early 18th century ('the roof thereof being fallen') so a new and presumably larger building replaced it in 1721-6, the builder being recorded as Thomas Fisher of Eastcote Hall.

What we see today is a handsome brick building consisting of chancel, nave and a sturdy square west tower. I would call it a typical Georgian church were it not for the fact its former large clear-glazed round-headed side windows so offended the Victorians that they replaced them with the Gothic ones we see today which don't sit well alongside the unmolested original windows of the tower and the east wall. This sort of alteration was common at the time in medieval churches that had seen changes to their fabric in the Post-Reformation centuries and could be justified as returning a building to something closer to its original form, but here it makes little sense, being at odds with the clearly Georgian character of the remainder of the building. Perhaps a case of a donor with too much money, and an architect with too little sense.

We may bemoan the 'gothicising' of the windows here as they do spoil the exterior somewhat, but it remains a picturesque building nonetheless, and the windows at least contain some good glass as we shall see if we are lucky enough to see inside. 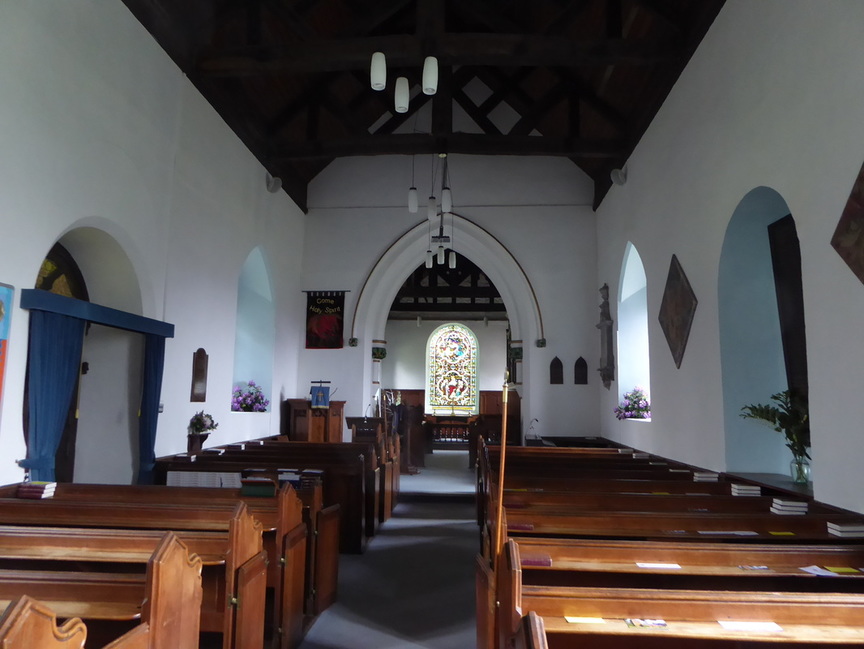 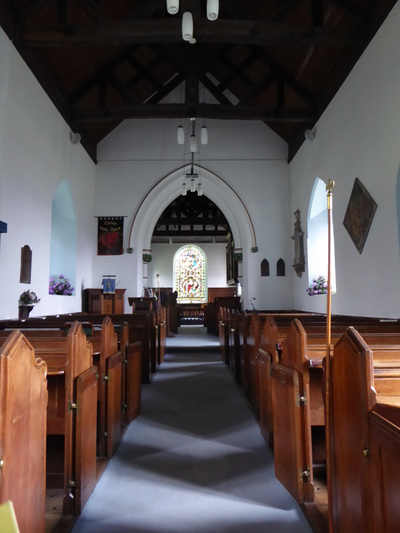 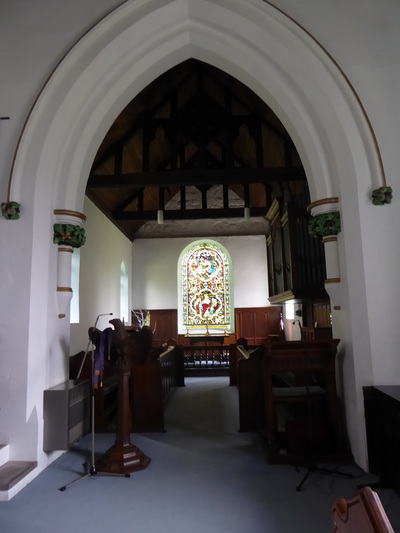 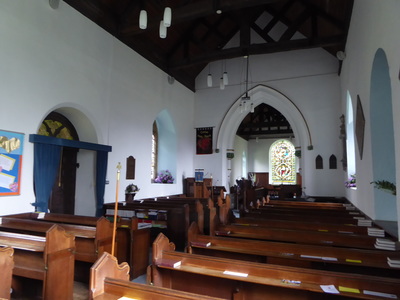 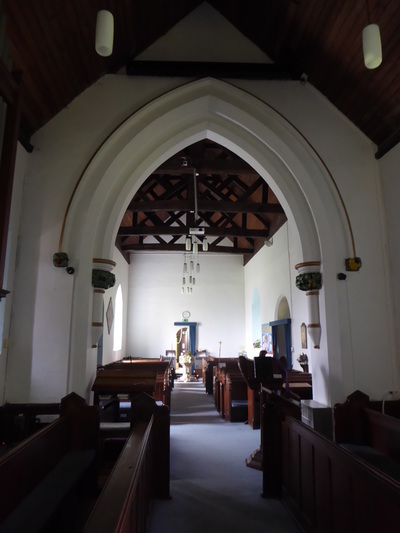 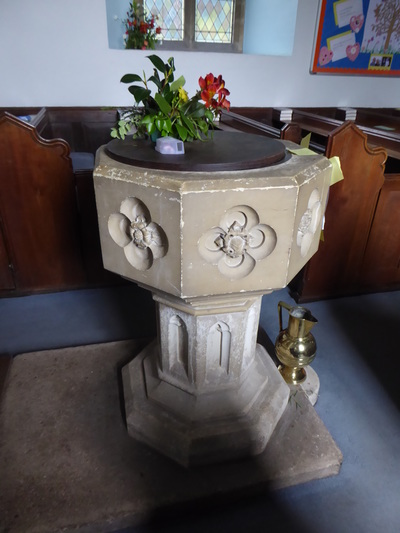 The interior is simple and whitewashed throughout, as it would have been when first built, though the Victorian restoration makes its presence felt immediately with further needless reworking along Gothic lines. The chancel arch has undergone the same metamorphosis as the windows on the north and south sides, having been replaced by an incongrous Gothic pointed arch, despite the original round-headed east window being retained (albeit filled with stained glass which it was never designed for). The roof too is all of this time, all open timberwork exchanged for what was most likely a flat plaster ceiling before, the high pitch adding some height to the interior. these pseudo Gothic interventions were the work of E.H.Lingen Barker and date from 1899-1900, which seems strangely late for such an insensitive 'restoration'.

The furnishings appear to be all of the Victorian period, none of the original 18th century fittings seem to have survived except for the communion rails before the altar. The font and pulpit are fairly standard Victorian pieces and again in gothic style, then far more fashionable than their humble Georgian predecessors .

The nave walls have a couple of tablets and hatcments mounted upon them, though I'm afraid I didn't reocrd these as my visit was fairly brief and I was rather distracted by the glass. 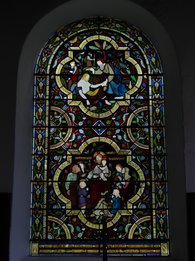 The east window, as stated earlier, is the only one in the main body of the church to retain its original shape and width but was nevertheless filled with stained glass by William Holland of Warwick in 1869 and thus feels as Victorian as the later alterations elsewhere in the building. However the fact that this window was donated three decades before the church's more thorough Victorianisation ironically is most likely the reason it was left alone when the rest were changed, since the glass couldn't have been accomodated if the aperture was reconfigured, and being a memorial window (to one Joseph Guest) the donor's family would not want to have seen their window discarded after a mere 30 years on an architect's whim!

This is the oldest window here and the only Victorian glass in the church, it is filled with colourful (if a little heavy) Neo-Gothic ornament around two large scenes in medallions, depicting the Good Samaritan above and Christ with children below ('Suffer the little children to come unto me', a popular subjecft at the time).

Sadly the paintwork hasn't fared well in places, particularly the faces of some of the figures, though the window is otherwsie secure, having been restored in 2008 by the Art of Glass studio. 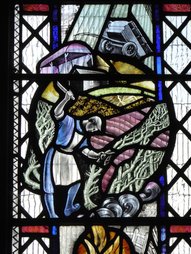 More satisfying are the two windows in the nave, particularly that on the north side by Nora Yoxall & Elsie Whitford dating from 1970. These two Birmingham-trained artists produced a number of fine windows across the Midlands in the postwar years (more nearby at Hampton in Arden) and this is a fine example of their style. The window commemorates local farmer Frederick Gilman (d.1946) and is filled with images connected with agricultural life in a delightfully richly detailed display. The tracery appropriately depicts a standing Christ, appearing to have harvested the grapes and wheat He holds. The window is bursting with life and activity, and whilst the palette by contrast is fairly restrained it is a combination that works beautifully; this window is a real joy and for me the highlight of the interior.

Opposite on the south side is the Millennium window, installed in 2000 and created by the Art of Glass Studio. The design was influenced by the Yoxall & Whitford window, with vignettes of local landmarks and animals portrayed in enamel-painted medallions in both lights, connected below by a bridge over a colourful stream. It makes a pleasing counterpart to the earlier window, a little more brightly coloured but well balanced. 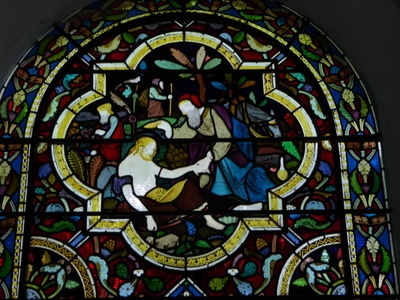 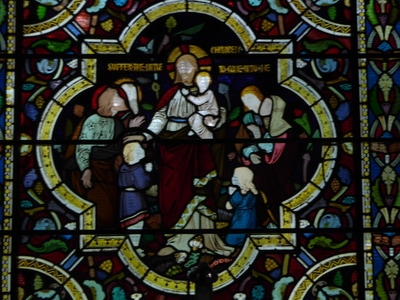 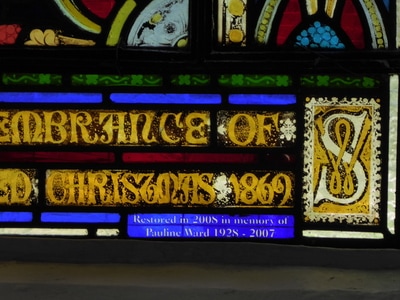 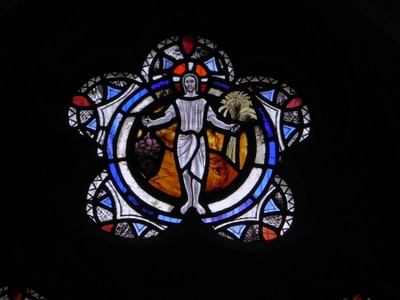 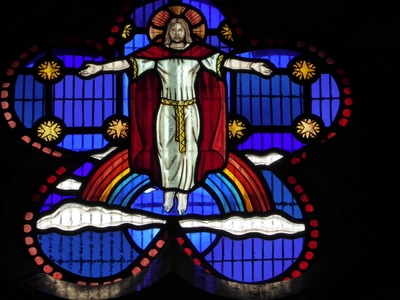 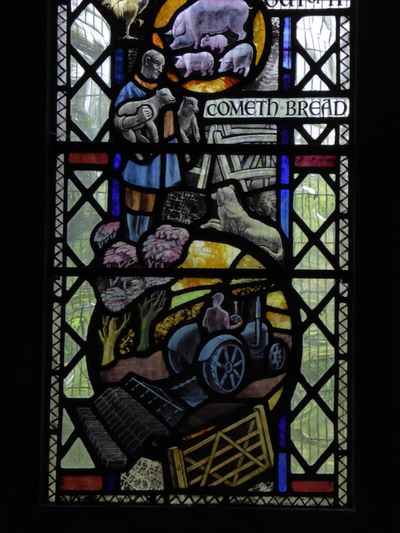 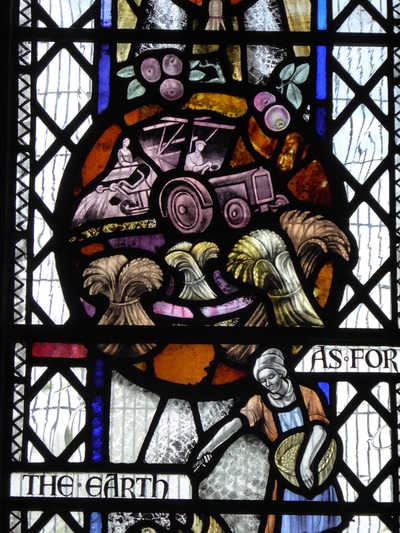 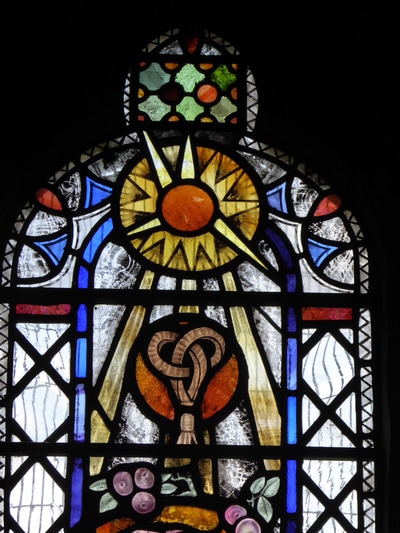 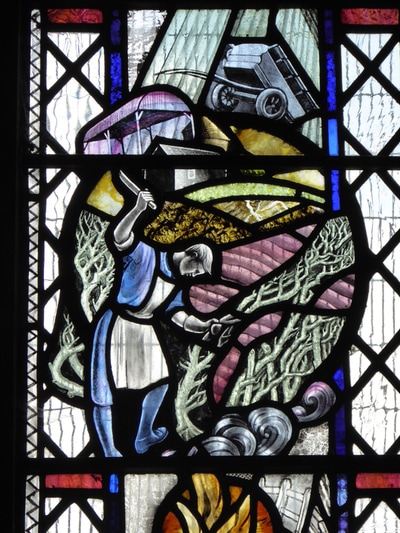 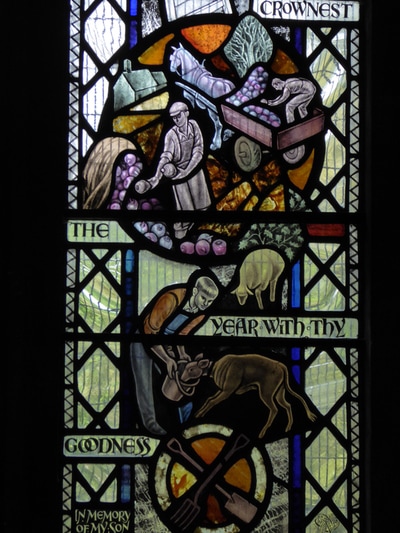 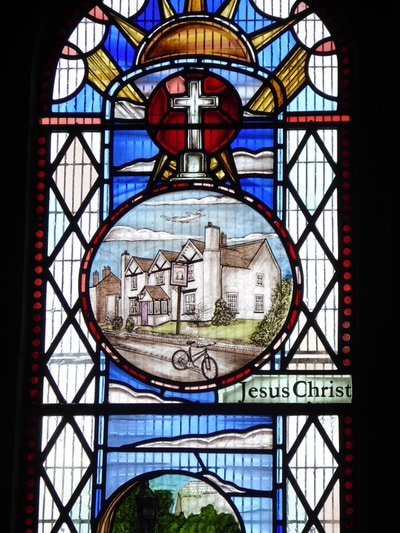 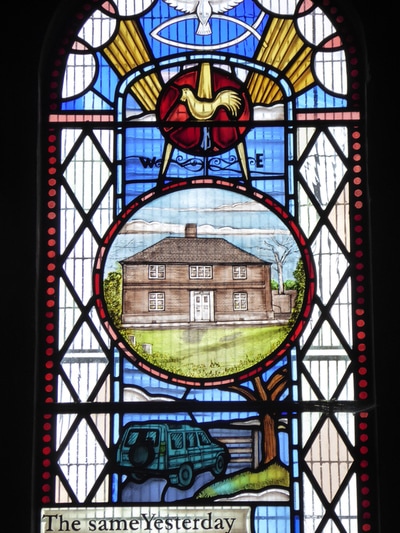 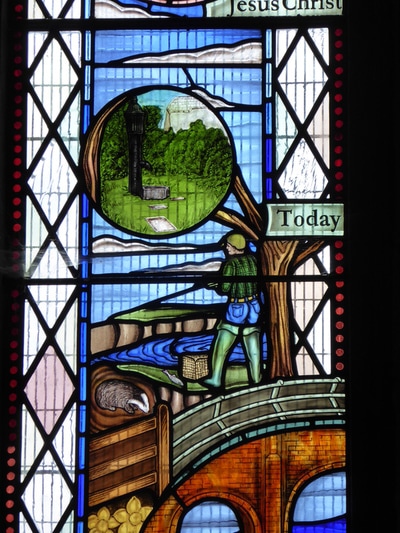 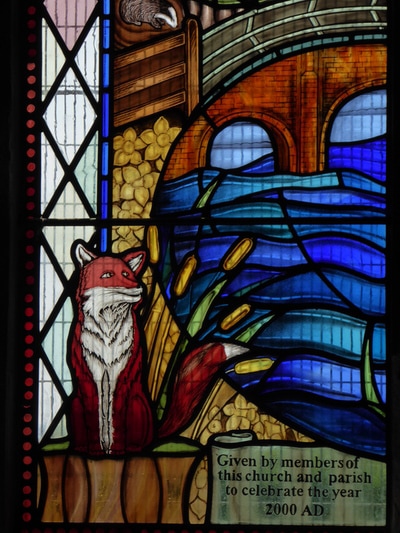 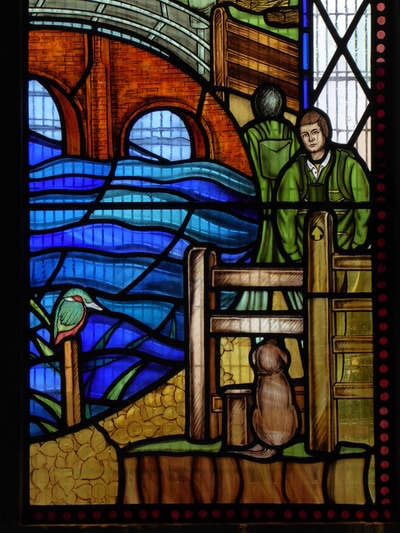 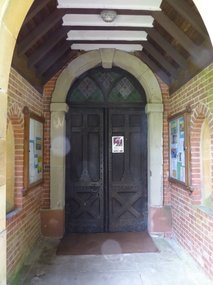 The casual visitor dropping in to visit St Swithin's will be unlikely to get inside the church as it is normally kept locked outside of services so an appointment will likely be necessary to see inside, unless one gets lucky with timing of course. i managed to do just that, having arrived later than planned on a Sunday hoping to catch the tail end of a morning service to have a quick look whilst still open. Happily there were still a few present when I arrived who were just about to leave, and I am huigely indebted to the lovely lady who kindly stayed on to give me a short tour of the church and its fine windows before locking up again which I greatly appreciated. I'm afraid i am writing this up rather later than I'd promised, but hopefully better late than never!

Barston church will not delay the visitor long with antiquities or grandiose architectural statements, but it is a quiet building of great charm and has some lovely glass from more recent times, which alone will reward a visit.