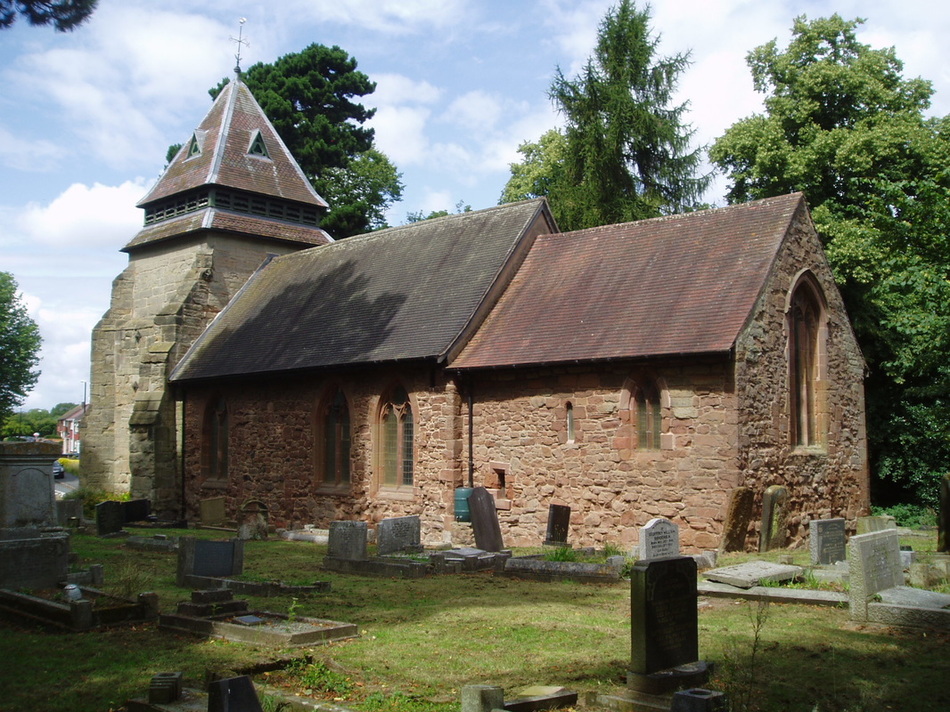 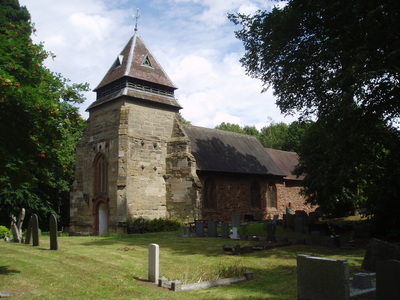 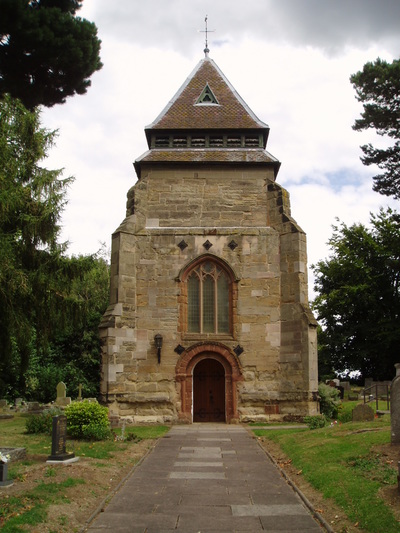 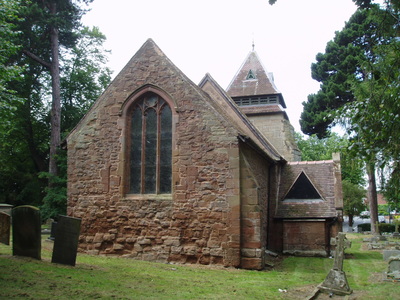 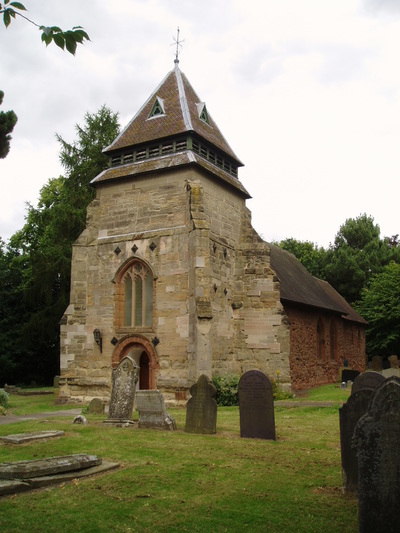 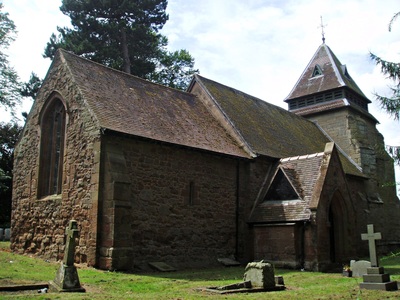 One of surburban Coventry's best kept secrets, this charming little church is found alongside the residential sprawl of Wyken Croft, and yet despote this location it still preserves the feel of a village church, being sheltered by a generous and  leafy churchyard, and open fields beyond. It is no longer the edge of city and countryside as it was in Pevsner's day, but there is still little to encroach or even be seen of surburban expansion provided we keep our backs to the main road. A pleasant surprise in a densely populated area. We are only a stones throw from Walsgrave (I in fact walked here from there) but the setting of that church is very different, a Wyken rural tranquility somehow prevails.


The church is a small and unpretentious building and that gives it a great deal of charm, a simple two-cell structure of nave and chancel with the red sandstone walls still largely of 12th century construction with a few typically 12th century Norman round-headed windows in the chancel, making it one of the very oldest churches in the area. The tower is of later construction and as at Walsgrave of contrasting grey stone; it appears to be of mainly 15th century date and never seems to have got far beyond roof level. It is capped by a low timber belfry under an attractive pyramid roof which is a Victorian addition, but a happy one, converting the stump of the tower into a very short steeple.

The church's small size became an issue in the postwar years when Coventry's population was growing, so in the 1960s an entirely new church dedicated the Risen Christ was built next door. Whilst this has largely taken over duties from the ancient church for many events, St Mary Magdalene's is still frequently used, often remaining the principal venue on alternate weekends. 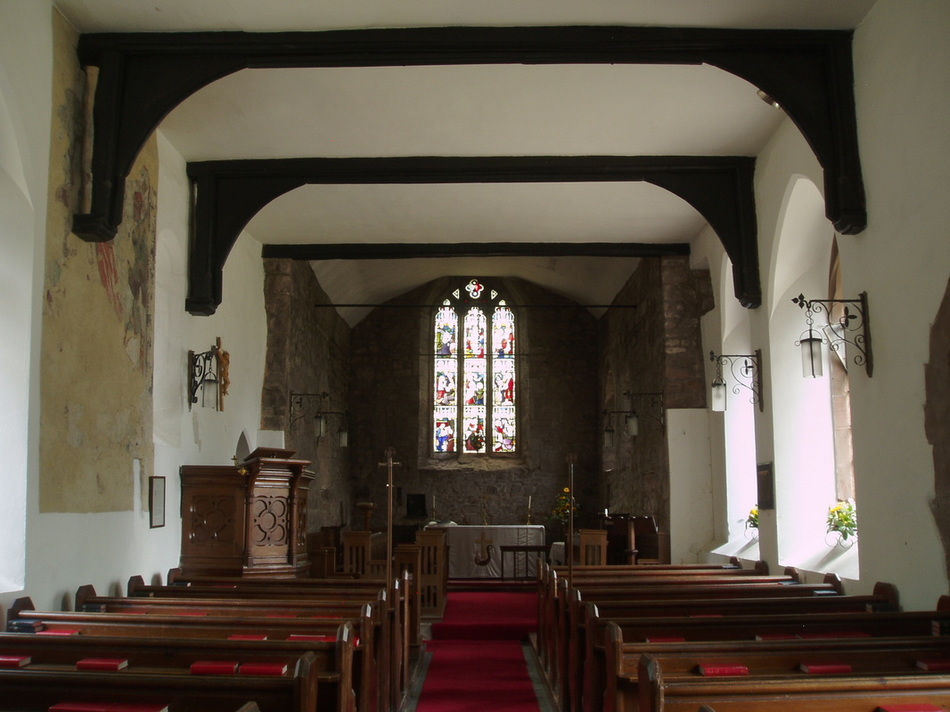 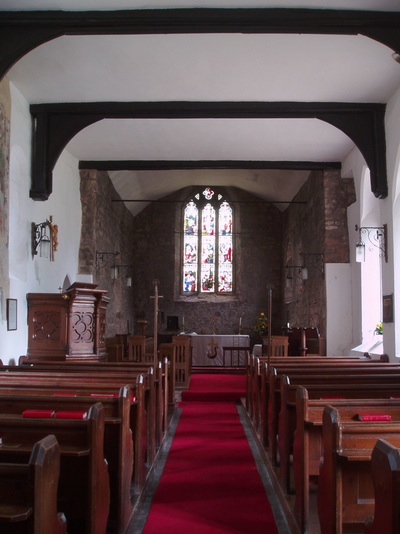 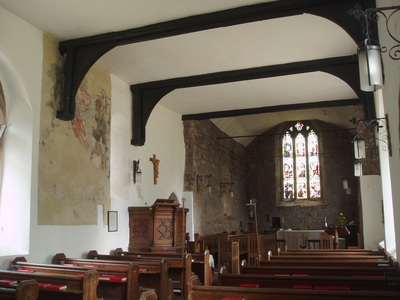 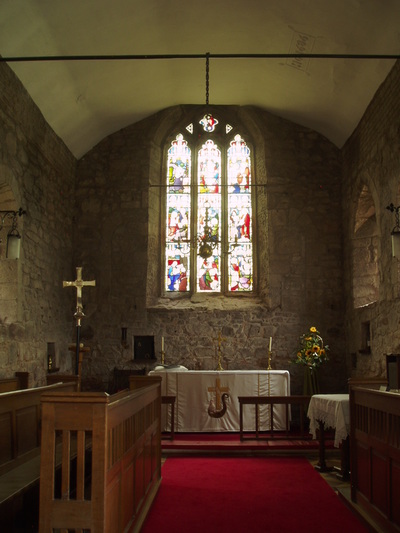 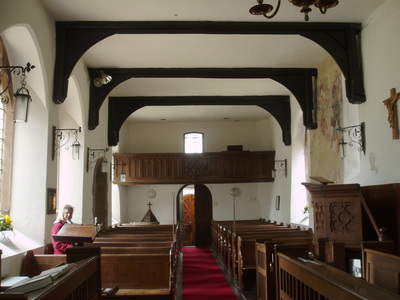 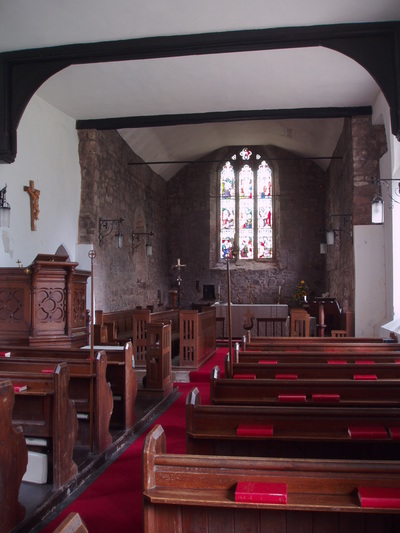 The main entry is the door at the west end under the tower (the only other door is a small porch on the north side, which appears to be a Victorian addition and nowadays used more for storage as there is no vestry). The doorway itself is Norman, and still of red stone, suggesting it was reused from the original west wall.
Inside the beauty of this simple space is immediately apparent, they eye is drawn immediately to the altar as there are no other spaces to distract it, everything is on an intimate scale, it feels as much chapel as parish church. The nave and its ceiling are bright and mostly whitewashed, whilst the chancel beyond is dark and mysterious, despite there being little structural separation.


The reason for this is the Victorian penchant for removing internal plaster finishes in medieval churches, such effects being known as 'scraped' interiors, and a widespread phenomena that provoked William Morris into founding the Society for the Protection of Ancient Buildings (S.P.A.B.). We are fortunate here that this 'scraping' back to the stonework was only applied to the chancel, for not only were many interiors rendered quite gloomy, much archaeology with remains of successive wall finishes and painted decorations were lost in the process. We are especially lucky this treatment wasn't extended into the nave, for there was later found the church's greatest treasure....

Regardles of the fact that so much of the painting is missing, it nonetheless remains one of the most significant pieces of medieval mural decoration in the Midlands and deserves to be better known. The drawing and colouring in particular are quite special. 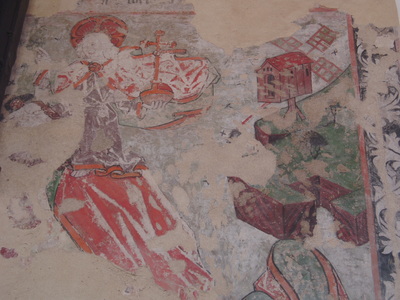 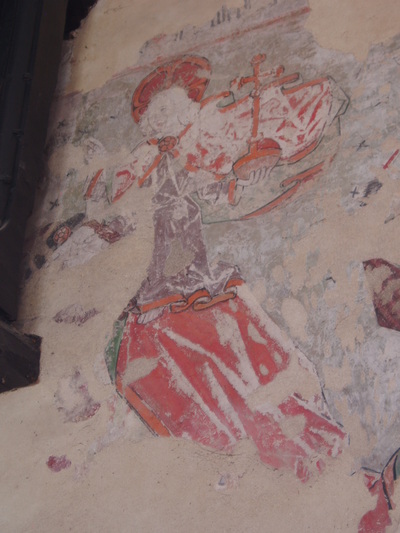 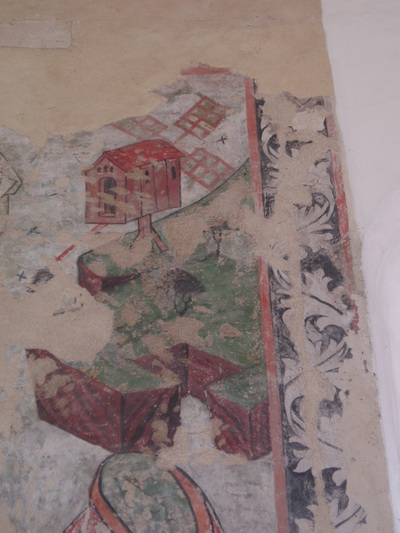 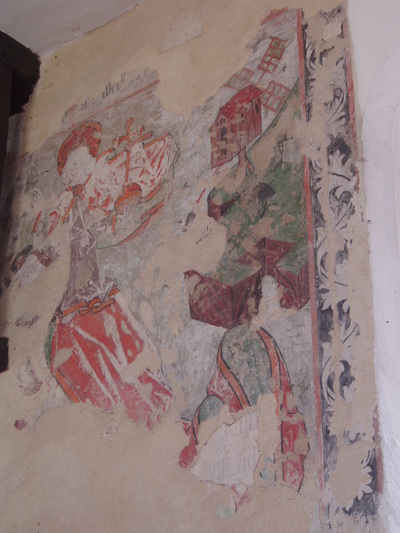 The furnishings of the church are otherwise fairly simple to describe, most dating from the latter half of the 19th century. The important exception is the font at the west end, which is a 12th century Norman tub font decorated with blind arcading, similar to the one at nearby Walsgrave.

The only stained glass is to be found in the east window, which appears to be the work of Westlake, Lavers & Barraud of London c1870, and contains nine scenes of the life of Christ, often giving special prominence Mary Magdalene as patron saint of this church. Sadly the painted detail has not worn well with the figures largely reduced to ghostly outlines. More detail can be made out at close quarters, but on the whole the window has suffered badly from underfiring ot the paint. 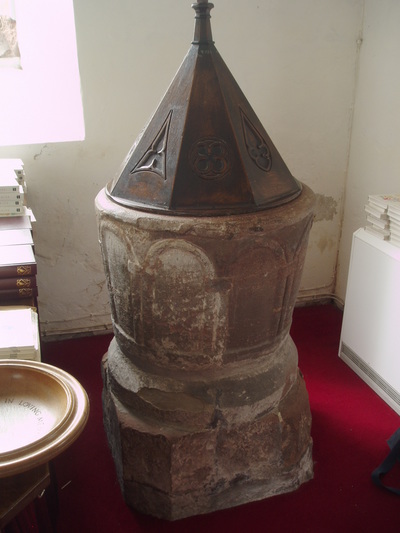 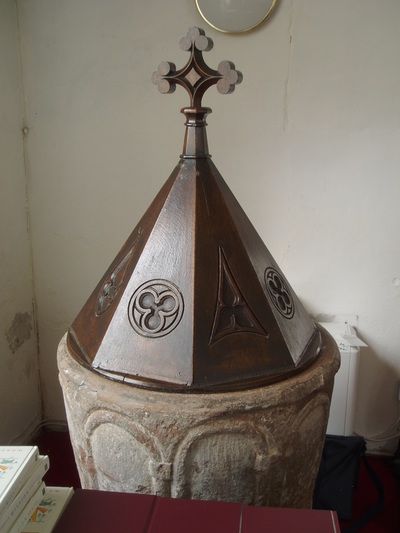 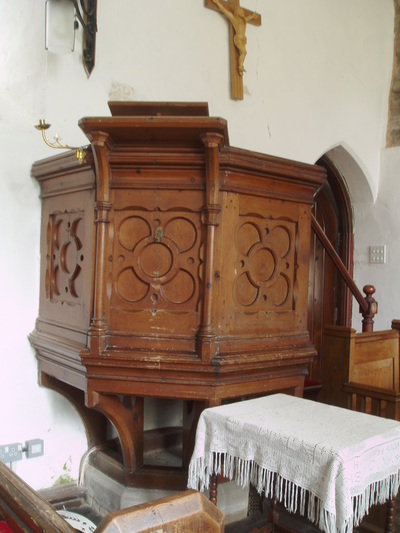 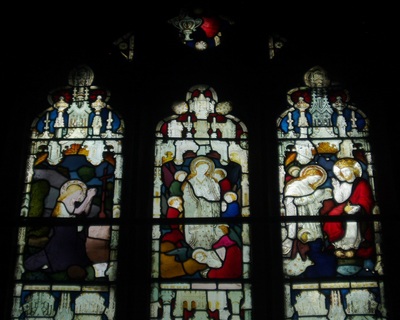 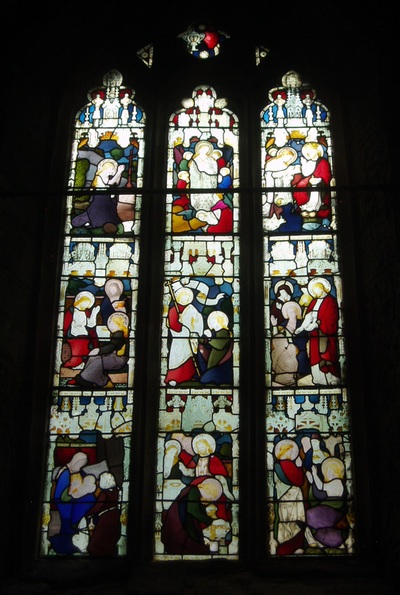 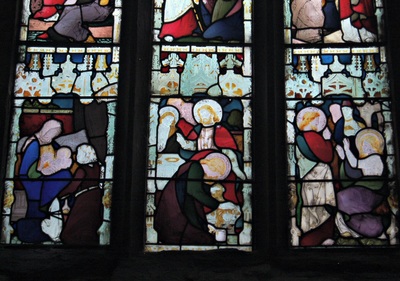 St Mary Magdalene's is normally kept locked outside of services, but is still a very much well used and loved church. Visitors may need to make arrangements to see inside, or possibly visit on days when the neighbouring Risen Christ church is hosting events (several days during the week) and someone there may be able to open. I am hugely grateful to the lovely lady who helped me out in this way, and delighted that she very much shared my enthusiasm for this special place.