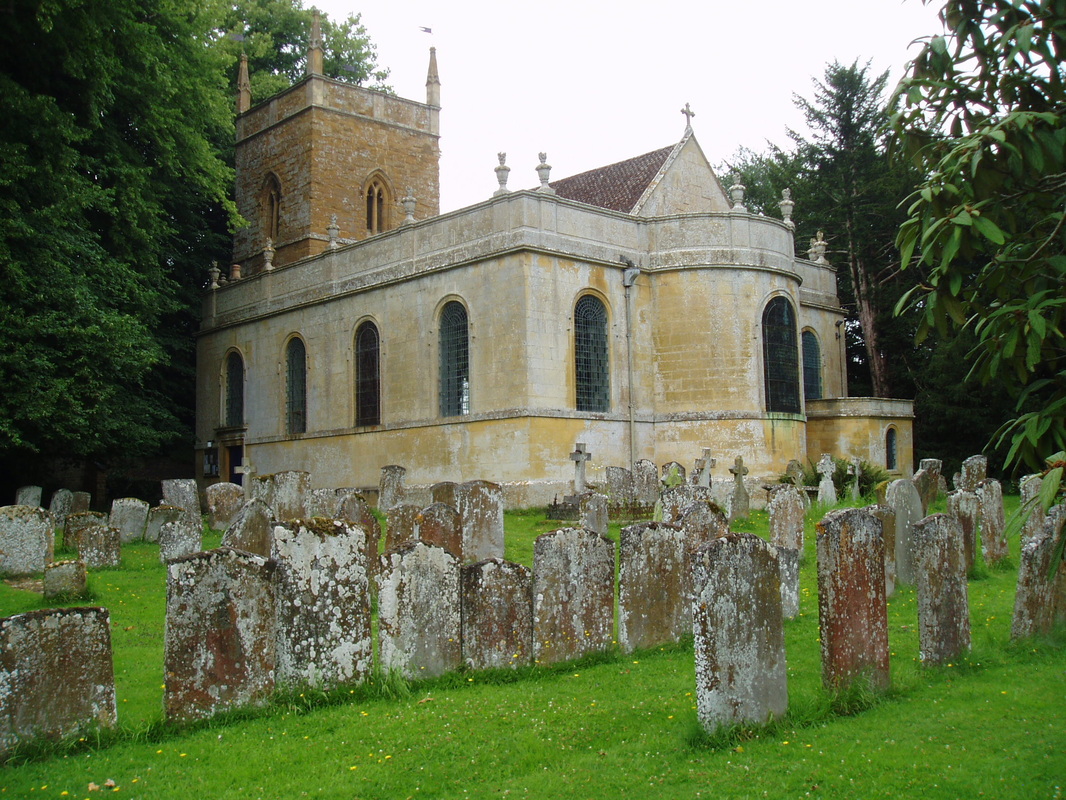 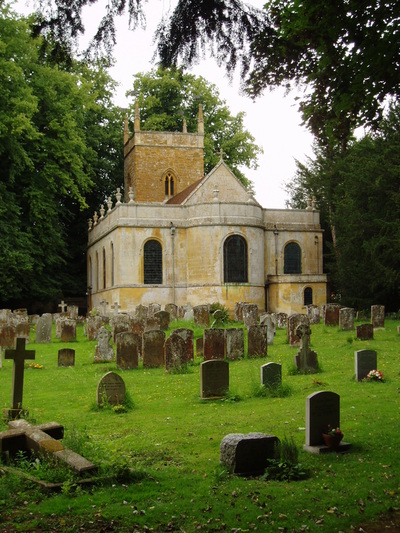 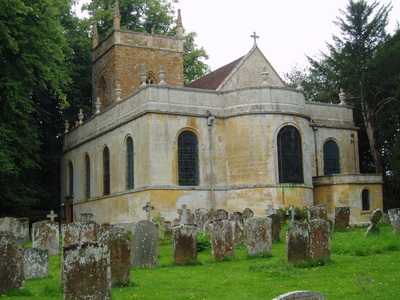 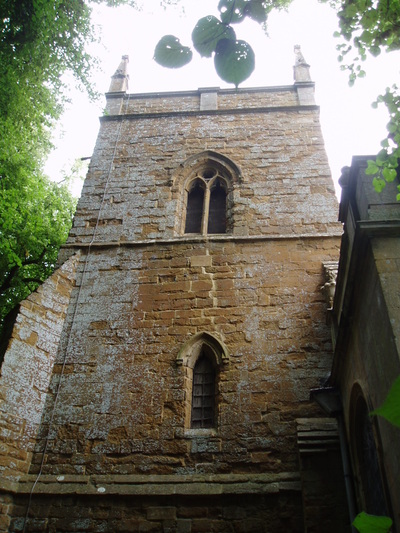 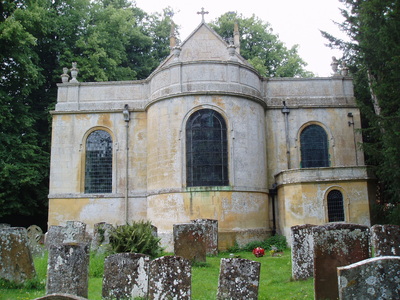 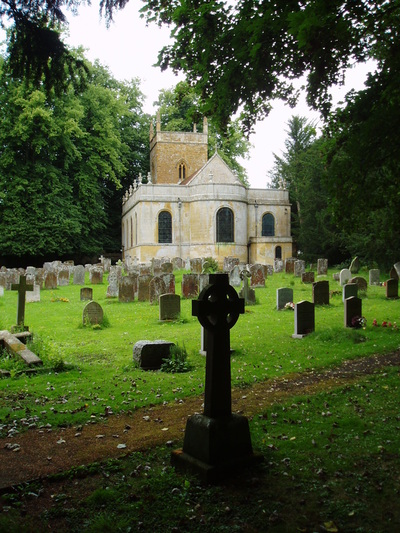 Honington's church of All Saints lies hidden away from view from the village, tucked in amongst the trees beside the privately owned Honington Hall and reached only by a narrow stone-walled lane that branches off, just before the Hall's grounds, and barely glimpsed beyond a shadowy lychgate. On passing through the lychgate, its wooden gates finely carved with wooden drapes and scrolling foliage, a beautifully picturesque sight is revealed, a compact box of a building, like a Wren church on retreat, having escaped the bustling City. All is rendered in pale limestone with an apse projects towards us, except for the rust-coloured ironstone medieval tower that peers over the building, as if to remind is that a church has stood on this site since long before the mid-17th century. The contrast sounds more incongruous than it is, in fact the effect is really quite pleasing, especially with a cliff of lush foliage serving as a backdrop to it all.
As gathered above the church dates back to medieval times but only the late 13th century west tower remains, and is currently somewhat overshadowed by the surrounding trees. The body of the church was entirely rebuilt in the 1680s in the form we see now, with large single-opening round-arched windows piercing the walls to admit more light. It is virtually square in plan, nave and chancel being combined architecturally with only the apse to accentuate the sanctuary, whilst the aisle are substantial enough to make the church appear as wide as it is long. 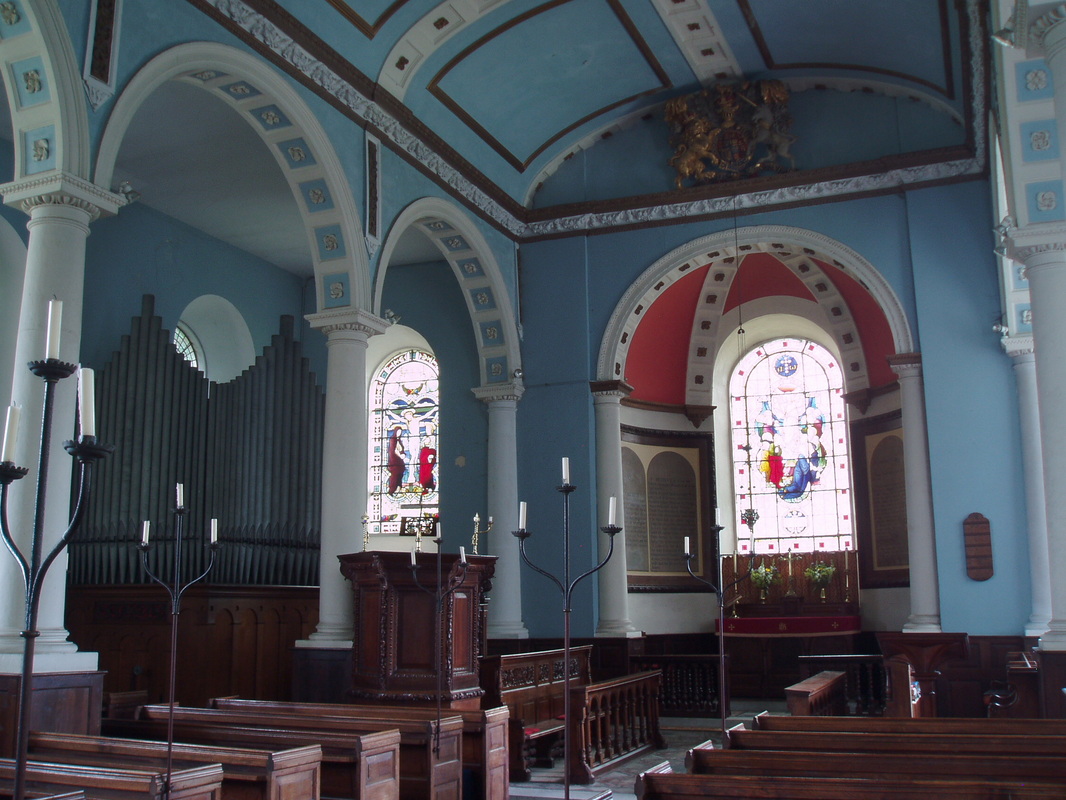 Entry to the church is via a door at the west end of the south wall, which leads into the aisle and the first glimpse of the beautiful duck-eggshell blue interior, richly adorned with plasterwork like icing-sugar confectionary. This is a complete period piece of a late Baroque church, with contemporary furnishings and monuments adding to the effect. A four-bay arcade with Tuscan columns separates the nave from the aisles whilst the apse beyond appears smaller within, it's scarlet ceiling contrasting with the subtle blue finishes everywhere else, and painted texts of the commandments flanking the east window. The current decoration is likely Victorian in date, originally it may have been more monochrome white, as one often finds in churches of this date. The only note of discord is the Victorian stained glass introduced in several windows, with Hardman's neo-Gothic figures not sitting well amidst otherwise fully this Baroque setting. They subdue the light somewhat, though to be fair the overhanging trees outside bear the bigger part of the blame for reducing the light. 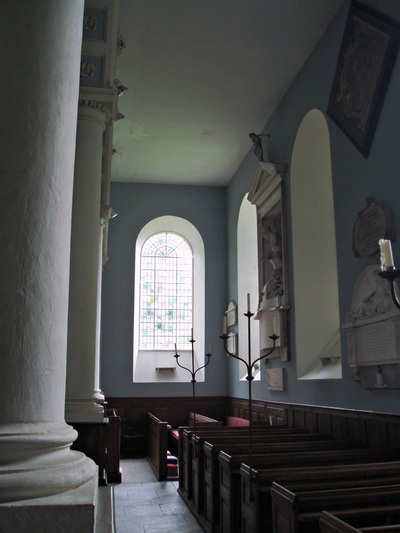 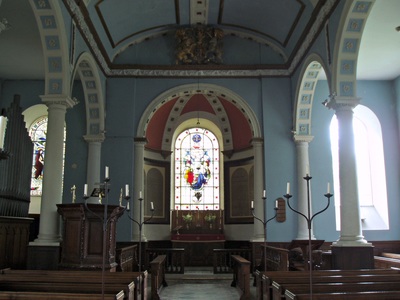 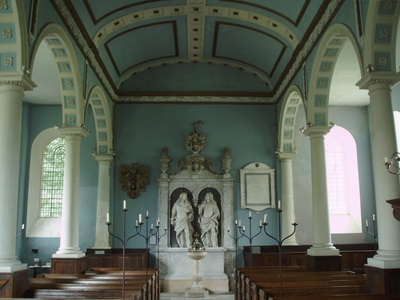 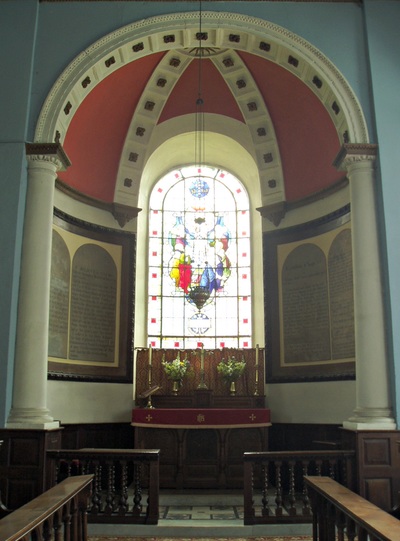 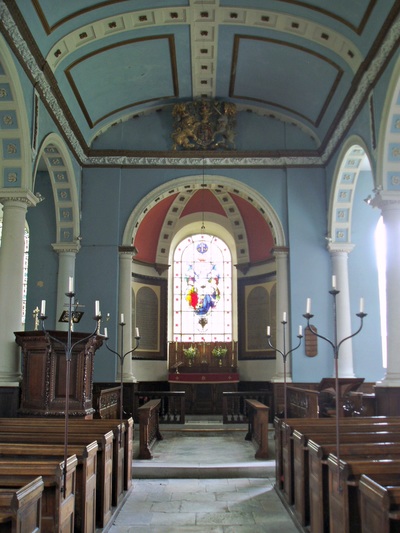 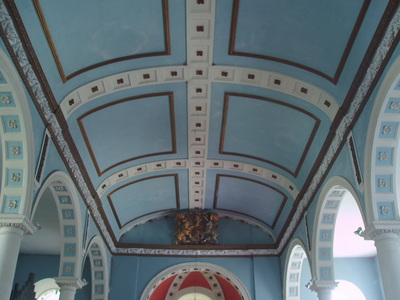 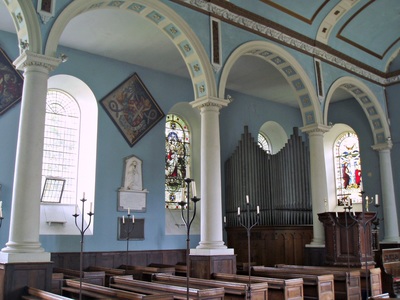 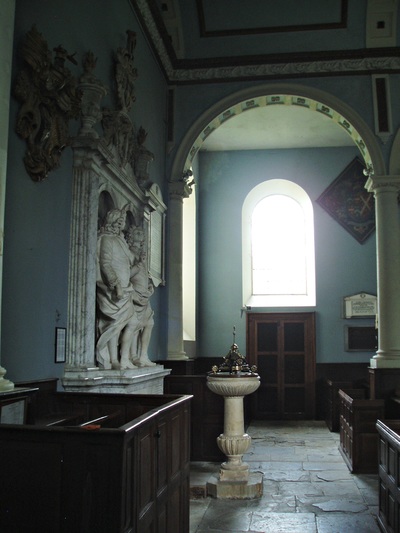 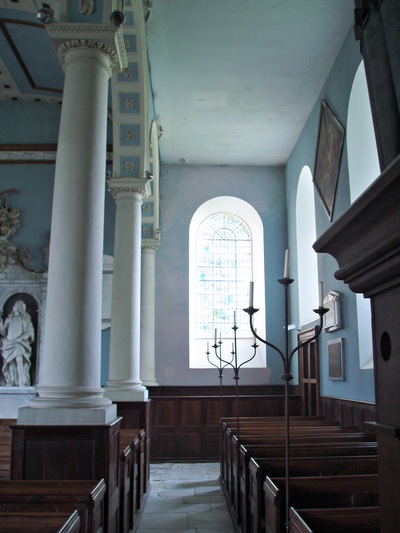 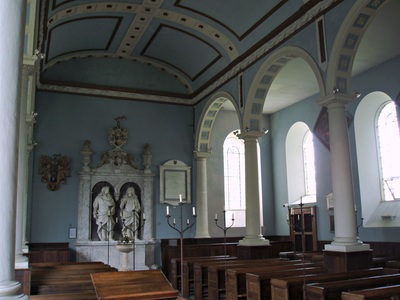 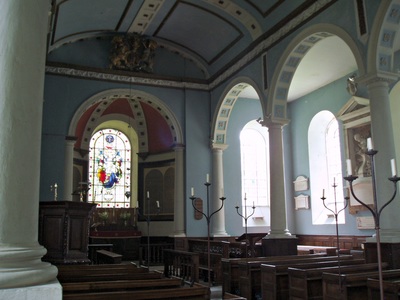 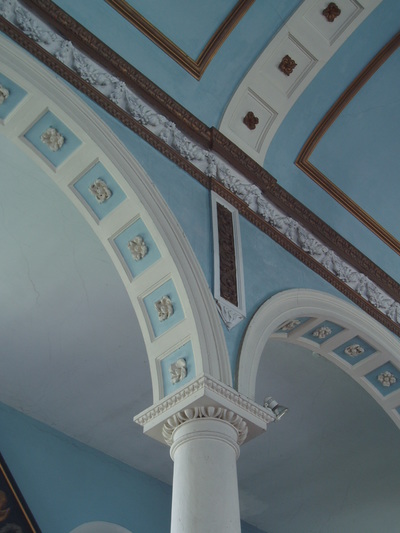 Perhaps the real highlight of the interior is the splendid Baroque monument at the west end of the nave, which creates a fine focal point when looking west from the altar. Two flamboyantly-wigged gentleman stand together as if in conversation, representing Sir Henry Parker (d.1713) and his son Hugh (d.1712) and are the work of sculptor Thomas Green of Camberwell. The sculpture is of very high quality and seems particularly well suited to this interior.

A less successful piece of sculpture can be seen nearby in a monument in the south aisle to Joseph Townsend (d.1763), which feature a seated cherub on a plinth, surrounded by memento mori. The execution of the piece is accomplished enough, but it is the strange, elongated cranium that compromises the piece, giving the figure an alarmingly alien appearance when viewed from certain angles..   The sculptor's name isn't known, but he was likely also responsible for a very similar monument in the chancel at St Lawrence's, Ludlow. There are too many similarities to ignore, though Ludlow's figure luckily had a more normally proportioned head!