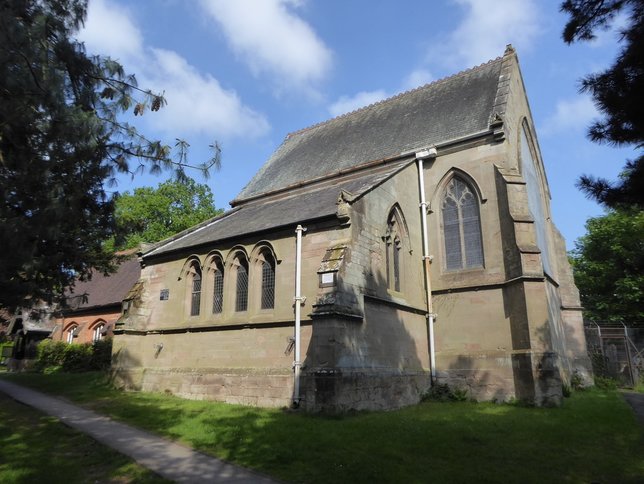 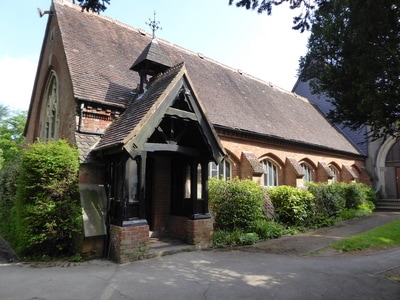 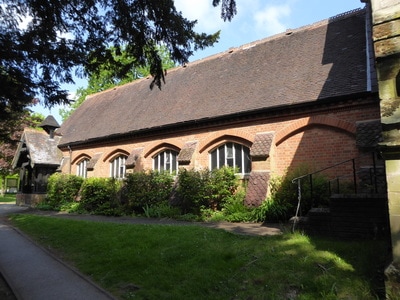 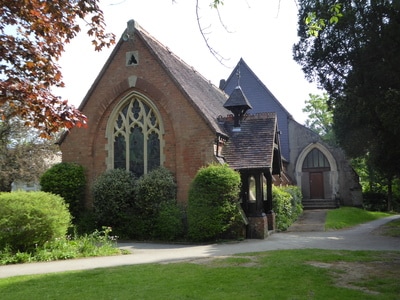 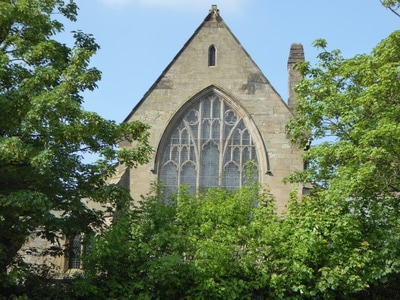 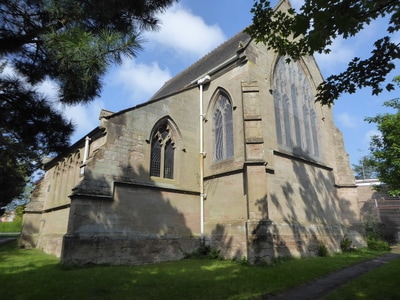 Dorridge's church of St Philip is a bit of an oddity, something of a surprise if one is expecting a conventional parish church, hidden away in Manor Road marked by neither tower or spire. My first ever glimps of it was the view from the nearby railway line, passing on a London-bound train and seeing the impressive east gable end standing proudly above the trees nearby. Usually the chancel is the smaller part of a church, a more intimate sanctuary entered from a more spacious nave, but here the arrangement is turned on its head, a humble brick nave followed by a grand stone-built chancel of greater height, part of an aborted late 19th century plan for a more ambitious building that was never realised beyond this point. Ironically thoughts have turned in recent years to further ambitions, and there is a proposal to replace the existing building entirely with a new church & community centre, so by the time you read this page it may well be out of date, though as far as I know the plan is aspirational with no firm timetable, and could yet prove too costly a venture to be realised.

The church only dates back as far as 1878 when the present brick nave was built, a mission church that could easily pass for a school-room or village hall were it not for the traceried window facing the road. Entry is by a small timber porch on the south side crowned by a tiny bellcote. Beyond is the awkward join of the newer chancel (which overshadows the earlier part) built in 1896-7 by J.A.Chatwin as the start of his bold new church which never progressed beyond this point. It is a more impressive sight from the south and east from where it is easier to visualise how the completed building might have looked, doubtless like many other late Victorian suburban churches had the new nave and tower been supplied. As it stands it might look distinctly peculiar, but is all the more unique as a result. 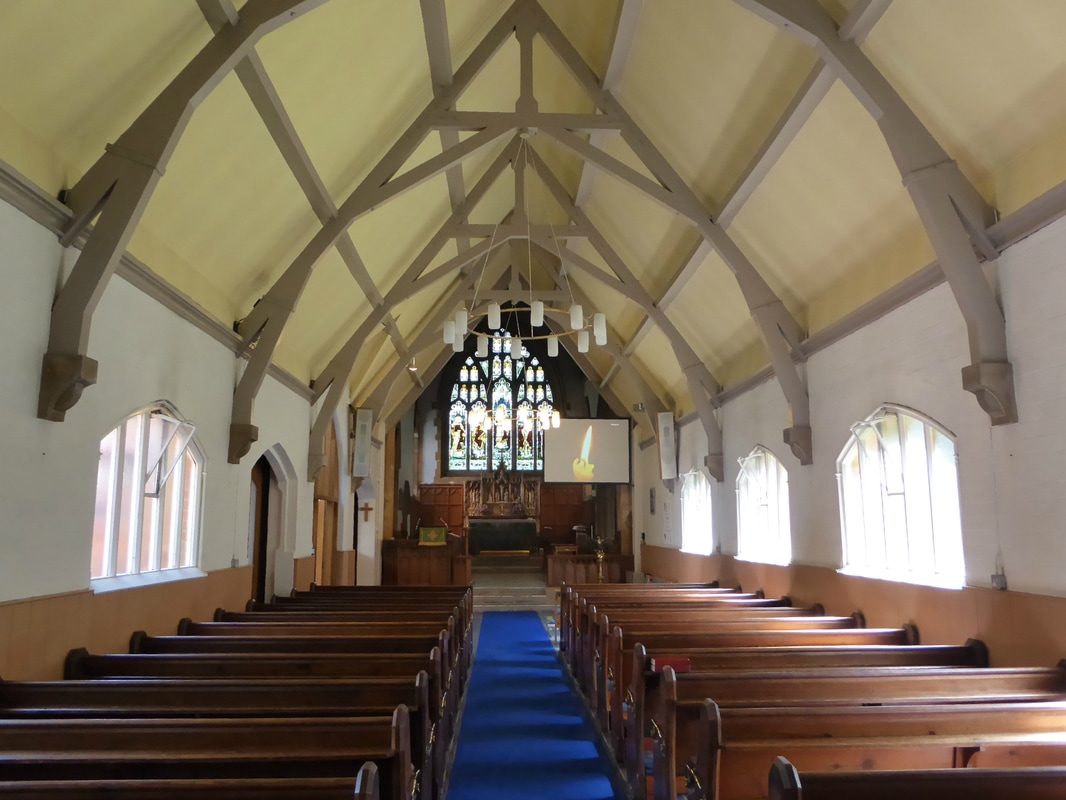 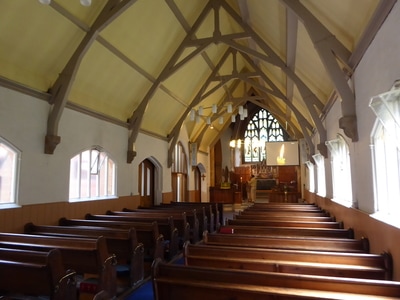 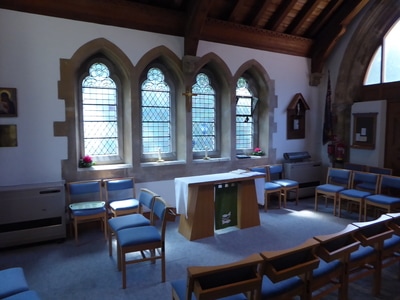 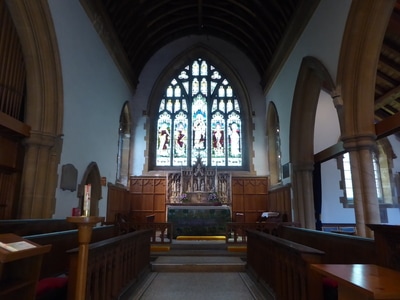 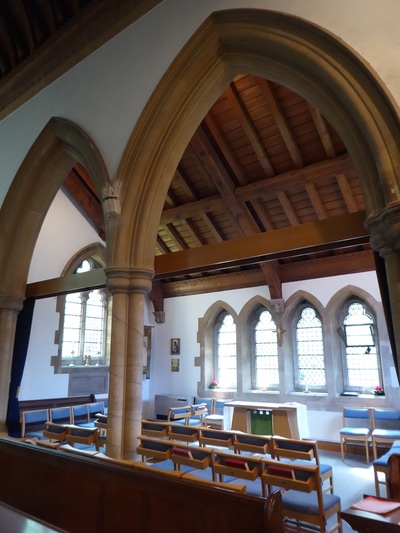 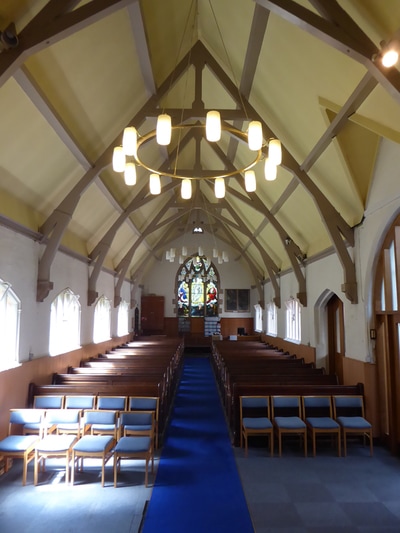 Inside the contrasting dimensions of nave and chancel are equally apparent like two different buildings spliced together, the former appearing like a long narrow antechamber to the latter space which opens out into a side chapel and vestries beyond. The nave is flooded with light from the plain, almost domestic-looking windows beneath a simple timber roof, itself lightened with ochre-coloured paint. The sanctuary by contrast is marked by much more subdued lighting, the main illumination coming from the large five-light east window which seems a little overpowering for the more down-to-earth nave.

Beneath the window is an elaborate alabaster reredos from c1897 which serves as a focal point to an otherwise simply furnished interior. The central panels portray in sculpted relief the Crucifixion flanked by an Annunciation and Resurrection.

The earliest glass was the original east window of the 1878 but following the extension of 1896 was relocated to the west end where it remains today. This three-light window depicts the Transfiguration of Christ, portrayed in mid air flanked by Elijah and Moses with three Apostles reclining below. It is the work of Birmingham stained glass maker Swaine Bourne (formerly of Chance Bros) and dates from 1878.

The much larger east window that replaced it in the new chancel is the work of Jones & Willis dating from 1912 and unusually depicts five aspects of Christ as separate figures in each light, Christ the King in the centre, whilst the remainder from left to right represent Christ the Good Shepherd, Christ the Teacher, Christ the Priest and Christ the Light (one of many images in glass based on Holman Hunt's famous 1853  'Light of the World' painting at Keble College, Oxford). The tracery lights feature angels holding a few excerpts of text from the Benedicite.

On the south side of the chancel is a two light window only visible when approaching the sanctuary; it depicts a lady in profile (perhaps a portrait) kneeling before Christ being welcomed into the heavenly realm with attendant musician angels. It is a rather standard work by Hardman Studios of Birmingham from 1921. 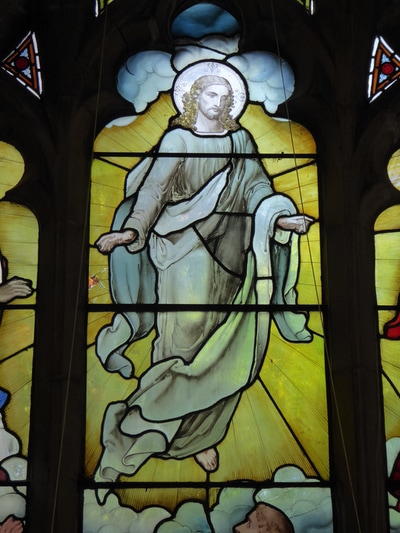 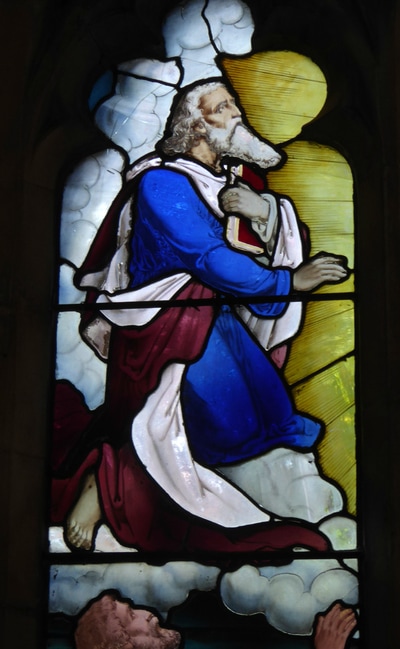 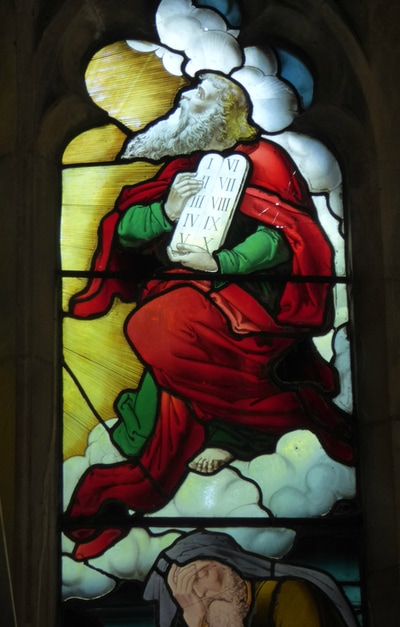 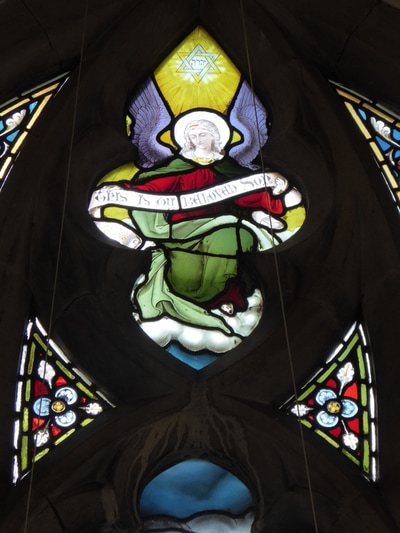 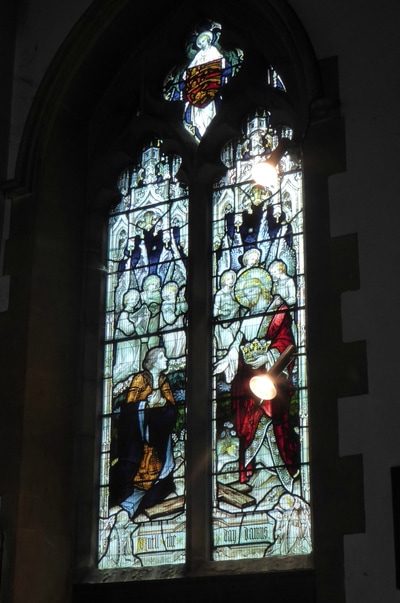 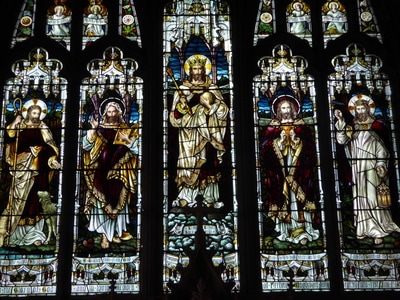 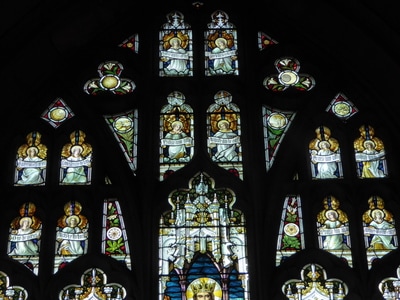 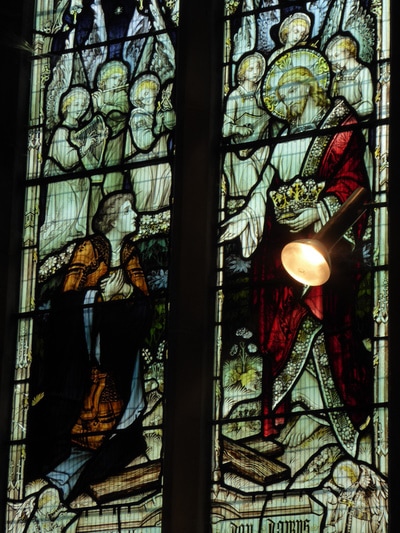 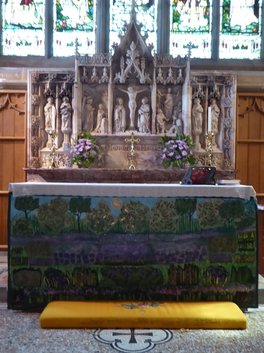 As stated earlier there are big plans for St Philip's that could see the entire building replaced by a new one. If this comes to pass the only element that appears certain to be retained in the current plans is the east window which is to be reused as the focal point of a modern interior, though the other stained glass windows and fittings would likely be salvaged for a less specified future location. The cost of this venture though is great and it may not be feasible to realise it, so chances are the building may yet remain in its present form, and there certainly appears to be support for things to stay more or less as they are, so only time will tell.

Dorridge church isn't an obvious visitor magnet compared to most, but is interesting for it's sheer oddity thus worth more than a glance. It doesn't seem to be open much oustide of services though so it may not be possible to get inside without either phoning someone up or timing one's visit close to a service (I got in for a quick look around 20 minutes before a baptism was due to start).